LEDs in backlit displays always find more use in lighting systems, household appliances and on the inside of cars where an even distribution of light with the least amount of light loss is required. We punch or plot printed or unprinted light-scattering films according to your specifications. The diffuser film is printed with a lightproof colour under negative pressure, whilst the writing and symbol remain colour-free. 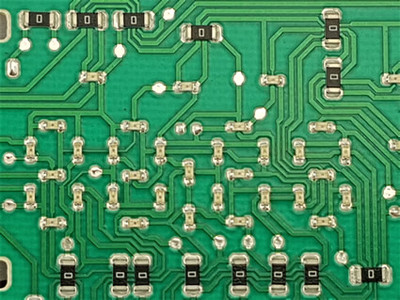 Light shafts are used to guide the light from SMD LEDs to the diffuser film without any loss. 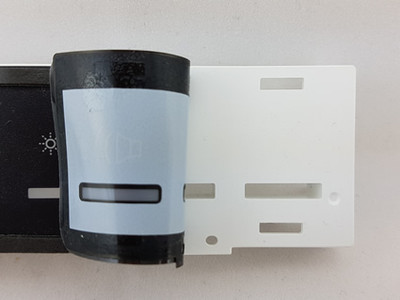 We install the self-adhesive diffuser film precisely onto the light shaft with the help of the locator holes. The locator tolerance here is ±0.2 mm. 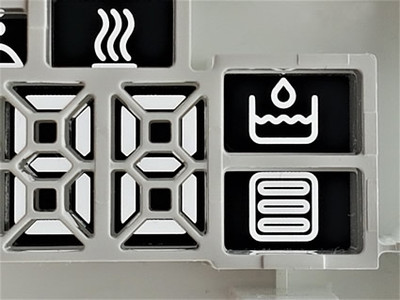 The symbols are positioned exactly over the individual light shafts. The printed colour is completely lightproof and the symbols are clear with sharp edges. 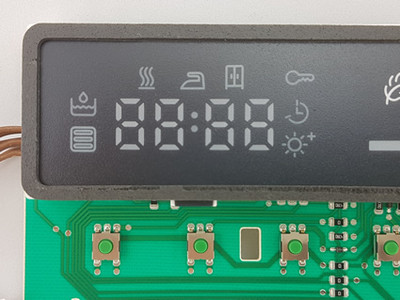 The circumferential foam frame seals the area between the display window and the diffuser film in the unit. The sealing frame prevents foreign objects and dirt from entering during operation.

Even colour-disappearing effects can be implemented well with diffuser films. Writing and symbols only become visible with the LED backlighting; writing and symbols cannot be seen when the LEDs are switched off, only the basic colour. In a further production step, the light shaft films are partially printed with a silk screen-printed adhesive, meaning writing and symbols remain free from the adhesive layer.

By using diffuser films (diffusion films, light-scattering films), an even distribution of light from LED light sources arranged into points or stripes is achieved with optimum surface illumination and minimum light loss.

The undesirable zebra stripe effects or LED spots become a homogenous LED planar lighting. The thicker the film, the more light is scattered (half-value angle) and the lower the transparency (light transmission level). Light shaft films contain microscopically small prisms, through which the light is scattered with the least amount of light loss. This is different when it comes to translucent (matt) films. Here the light is scattered unevenly through the added white colour particles, along with a high loss of light.

Material thicknesses from 150 µm to 500 µm are available.

The operating temperature ranges between -30°C to 145°C.

The visual characteristics of light-scattering films are characterised by the following sizes in data sheets:

The Haze value (turbidity, scattering) characterises the transparency of films. The share of dispersion of light falling through is between 0% and 100%. At 0%, the film is completely transparent and at 100% the light is scattered completely. For highly transparent, smooth films, the value is < 5%.

The light transmission level characterises the share of visible radiation that passes vertically through the film. The higher the value, the less light that is swallowed up by the film. At 100%, the light density is not lowered by the light-scattering film.

The half-value angle is the angle of the LED light source’s cone of light, for which the maximum possible light strength is still guaranteed at 50%.